This is a post-compo version with additional improvements over the submitted entry. Playing fullscreen is strongly recommended if you use the mouse wheel to switch shapes.

Objective: Shoot all the things, survive as much as you can.

How to destroy creeps: Shoot them while in a different shape than theirs.

Every enemy can hit you, but you can absorb bullets shot by enemies with the same shape as your current ones and get some energy. What will it be used for? Surprise!

Controls depend on the choice of input, check them in-game.

Wow it got a lot harder! Which is fun! Though, to be honest, I almost never try to absorb enemy hit, I guess I feel to risky? Anyway I mostly take damage from bumping the enemies xp

oh btw, in the windows build the cursor suddenly disappear after the first screen!

Anyway, great job and keep up the good work!

Thank you, and thank you again for your feedback! :)

Yeah, right now there are around 4 difficulty levels which increase after every minute, so the difference should be noticeable compared to the compo version (It only had an additional difficulty level, and you got there after playing for 3 minutes). However, I still need to tune it a lot.

As you say, it is true that in higher levels trying to get enough energy to use the blast is too risky. Some annoying behaviour I've noticed while playing the game myself is that if you're farming enemies from a particular type without having cleared all the others (or if a new critter of a different shape appears), the group seems to "shelter" those guys, so at some point you're preparing to take in several "friendly" bullets and end up being hit by a rogue bullet shot from one of the others.

No problem! Thank you for playing my game and for the feedback too!

Oh maybe you could have an arcade mode too? I guess that way difficulty could adjusted by hand (though there still should be tuning for survival mode) and the blast could become more attractive, like in a boss fight or something... I don't know, just some thoughts xp 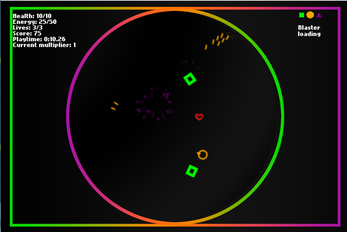