This is the post-compo version of my entry for LD37.

Please don't hesitate to leave any feedback! Although I've made several changes, the game is still missing lots of features, and some of the new ones aren't final yet, so constructive criticism is encouraged.

16/05/2017: Updated Android version to v0.0.2
Apologies for the delay. I was quite busy these past months at work, and also I started working on a prototype for a friend's project.
This is a very minor update that finally updates the Android version to v0.0.2. It basically includes a fix for an issue with the game camera position not being scaled correctly on devices with resolutions different from the base one.

The Android version still corresponds to v0.0.1. I need to fix some bugs before uploading it.

This release has taken some time because of some serious lack of inspiration for the sound and music. I'm still not fully convinced with some of them, but I want them in as a first iteration. If they sound grating you can disable them on the settings pane :D

Hopefully, the next one will include:

Help Roachie reach the flashing goal and escape the room. It broke an antenna, so its sense of direction is a bit off: when it finds a wall, it simply turns right, being an easy prey for missing tiles, infinite loops of wall-bumping and the ghosts of enemies that didn't make it into the game in time.

To assist it you need to place special tiles on the floor. Roachie will follow whatever direction is stated on them.

Watch out for gaps!

The game is controlled with the mouse (touch on mobile devices).

While in editing mode, click on a tool to select/deselect it, and then on any valid cell on the board to place a tile.
Click on an already placed special tile to return it to your hand.

Once you're satisfied with the layout, press the play button and watch Roachie move. If it gets stuck you'll have to go back to editing mode manually, or wait until some of the level stat limits are hit.

Thanks! Currently working on improvements, new levels will follow :) 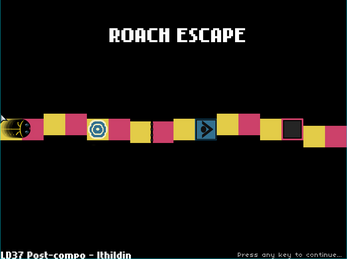 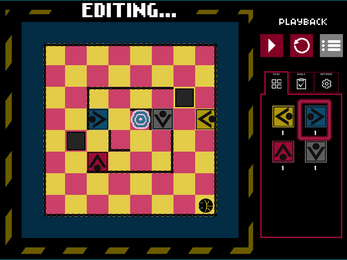 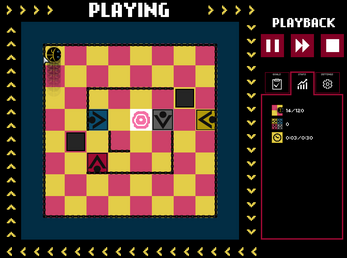 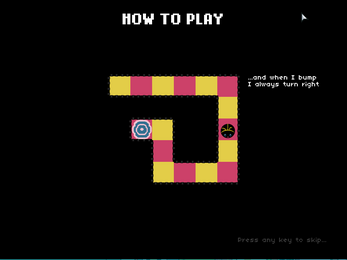